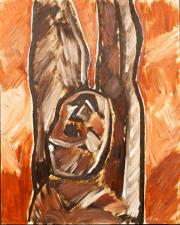 My earliest pieces involved drawing abstract shapes onto cardboard and then cutting the cardboard into strips and then collaging the strips on yet more pieces of cardboard with different colour formats.

As time progressed I began adding in abstract symbols using gouache and acrylic. Many of these early drawings later served as subjects to be painted direct onto canvas with variations and then the use of gluing small found objects usually made of metal onto these paintings. During my first four years of painting I gradually progressed to full sculpture paintings which would involve attaching nails and metal objects onto wooden panels and drilling into the panel to make room for string to be wound through and around the panel -- then the nails to form obscure stringed instruments. I found it very useful to start off with an odd shaped piece of wood as it could be glued into the finished piece at the end and then the whole piece would be painted with emulsion from the hardware store. These pieces were made exclusively with contact cement as it proved very robust. I would like to eventually return to this type of sculpture painting.

All of my work since 2012 involves extensive one- to four-day drawings onto coloured cardboard to achieve a full profile of a figure or figures. Then I use a variety of techniques including brushes and disused match boxes to apply the paint. The figure or figures come alive in a hybrid painting that usually blends impressionistic and expressionist -- and occasionally surrealist -- ways of rendering the figure into one cohesive 'fusion' oriented painting. I feel painting with only one technique becomes very tiresome so I am now devoted the practice that I call hybrid painting, which other people have done and discussed but which has never taken off as a mainstream art movement.

MUSIC THAT LIVE FOR PEOPLE, Toronto 1998