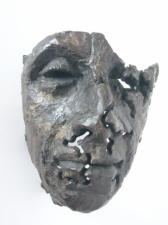 Camie Geary-Martin was born in Kingston, Ontario in 1954 and during her childhood she lived in many cities in Canada, England and Germany. After studying theatre arts in her twenties, Camie worked in theatre and sewed costumes for The National Ballet of Canada.

In 1999 she began studies at the Toronto School of Art and afterwards Pasadena City College. In 2000 she sculpted a bust of Dr. Ursula Franklin which was cast in bronze for the Toronto District School Board. The following year she received a commission to create a bronze bust for St. Mary’s Church in Toronto.

Camie’s sculptures are now enjoyed in many private and public collections throughout North America.